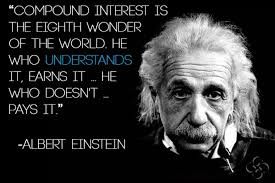 Is the power of compound interest really the 8th Wonder of the World?

There’s an oft-told story that when Albert Einstein was once asked what mankind’s greatest invention was, he replied: “Compound interest.”

There’s even one claim that Einstein called compound interest the “8th Wonder of the World.”

While there is some debate about whether Einstein really said any of this or not, there’s no question that compound interest is a brilliant thing.

As another great American, Benjamin Franklin, described it:

Compound interest is great when you’re earning it… however when you’re racking up interest on your credit card debt, it’s not so great.

And, when you get your monthly credit card bills, you’d probably agree with Einstein about it being the most powerful force in the universe.

While the compounding of money may sound complicated, especially if you don’t have a computer spreadsheet handy, there’s actually an easy-to-use formula that’s been around for years: and you can use it to make calculations in your head.

While it’s not as precise as a spreadsheet, it’s extremely effective in helping you make financial decisions.

Many times when you’re dealing with finances–especially when it comes to making new investments, buying real estate or capital spending–you’ll hear people talk about the potential of doubling our money and how soon that might happen. If you’re considering making an investment with a given interest rate, you can use the Rule of 72 to figure out approximately how long it will take to double your money.

Let’s say someone offered you the chance to invest in a piece of property in return for 10 percent interest for your loan. Divide 72 by 10, and you get 7.2–which is the APPROXIMATE number of years it would take for you to double the value of your investment.

You can also use the Rule of 72 the other way around:

If someone promises they will double your money in 3 years, you can divide that into 72 and determine that they are willing to pay you an interest rate of 24 percent on your investment (72/3 = 24 percent). That can be a good “fact check” because 24 percent is really high, which means the investment is also likely to be very risky. Personally, I think 24% ROI on a 3 year investment is “too good to be true”, but we’re just using the example to illustrate the power of compounding.

The “Rule of 72” can also be very useful when it comes to calculating things like how often your money will double over the course of your career.

Let’s say that you’re 30 years old and you’ve already started socking away some money into a 401(k) account that generates a 10% annual return. Let’s say you have $500,000–hypothetically–in this account and you plan on working until you’re 65. If you leave your money in that account until you retire, how much will you have?

Well, if you use the Rule of 72, you will see that you can virtually double your money every seven years (actually 7.2).

This means that your money will double in value around five times over the next 35 years of your working career, which means you’ll have…

That’s the kind of math that totally astounded Einstein and Franklin–and shows you the power of saving as much money as you can early in your career in a retirement vehicle like a 401(k), so that it can compound over time.

There’s actually another quote attributed to Einstein about compound interest that should serve as a warning. He supposedly said: “He who understands it, earns it; he who doesn’t, pays it.”

So, if you want to make sure you fall into the first category, and not the second, use the Rule of 72 as your guide.

What do you do?