Commodity Futures Trading Is Not For Average Investors 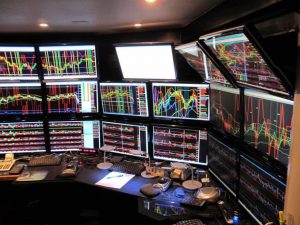 There’s an old saying among commodity traders: “It’s easy to make a SMALL fortune in commodities… just start with a LARGE fortune!” This is not a business for people who are emotionally attached to their money, and can’t find 2 quarters in between the cushions of their couch to rub together. Yet thousands of average “investors” get lured into the commodity markets year after year.

Why? Because of the possibility of making high percentage gains using the built-in leverage that is available to commodity traders. The same can be said for forex and binary options, precious metals and other investments.

The commodity markets include wheat, corn, soybeans, pork-bellies, gold, silver, heating oil, lumber, and numerous other common trade items. The companies that operate in these markets use commodity “futures” contracts to lock in their selling prices for the product in advance of delivery. This practice is called “hedging” — or, literally — hedging their bets. Because, in reality, they ARE, indeed, betting on the market.

On the other side of that equation is the trader, who speculates on whether the price of the commodity will go up or down before the contract is due for delivery. Because futures contracts may be purchased using leverage, these financial instruments lend themselves to speculation. Which is why you see the markets fluctuating so much in volatility.

You can easily see why investors in search of quick gains are hypnotized by the lure of big profits using maximum leverage in commodity futures trading. The real problem, however, is that the leverage works in BOTH DIRECTIONS. You can lose your entire investment in a matter of minutes — if not seconds — due to the wild price gyrations that sometimes occur in these volatile markets. Let’s say the $5,000 contract drops to $4,000 in value instead of increasing. You’ve not only lost the original $500 you put into the contract, but an additional $500. You can broke faster than a fat man falling off a trolley!

So why do people play this game? Average investors do not wake up in the morning and say to themselves, “Right, I think I’ll start trading commodities.” What happens is, they receive a sales pitch from a commodity trading “guru” claiming to have a “system” for generating sure-fire profits in these wild markets. These “systems” range in price from $25 all the way up to $5,000 (or more) and are sold based on the promise of “huge profits” from a small starting investment.

Normal people don’t just wake up one morning and say to themselves, “I want to lose $50,000 in 60 seconds, because I have nothing better to do.” That’s insanity! But yet, you see people do it every day on the internet because they get sucked in by some scammer in an anonymous email.

Newsletter writers or commodity gurus regularly pitch the myth about turning $5,000 into a million

bucks in less than a year. The typical commodity system pitch comes in a long sales letter or booklet that describes a method for winning on “9 out of 10? trades or similar inflated claims.

Of course, if it was possible to correctly trade 90% of the time, a person could easily amass millions of dollars in a very short period of time. But the reality is that no one, absolutely NO ONE, can correctly predict massive profits all the time. Many times, there are losses, and the only one making money on the trade is the broker. And he or she makes money either way… whether you win or lose.

So why are these guys so eager for you to spend $195 on their super-duper trading course? Because they probably aren’t making any real money with their own trading program! There’s much safer money to be made selling others on the “idea” of getting rich in commodity futures trading, than to actually invest in the markets.

There is no sure-fire way to consistently make money in the commodity, forex and binary options markets, simply because the underlying prices can swing wildly back and forth depending on a complex set of variables, many of which are totally unpredictable. That’s why the only people consistently making money in the commodity markets are THE BROKERS, who collect a handsome commission for executing the trade… regardless of whether you make any money or not.

There are also a small handful of successful professional traders who make a living in these markets. But the vast majority of people who dabble in commodity futures lose money. Unfortunately, with the lure of huge returns and easy money, a fresh crop of innocent traders will enter the market each year, only to be quickly fleeced out of their money.

Can someone really take $500,000 and parlay it into $140 million dollars over the course of 4 or 5 years? Sure! But they know what they’re doing. They’re probably educated, and a hedge fund manager. The common schlep who gets sucked into these scams are “working stiffs” who have worked all their lives, saving their money, and making solid profits by investing in safe investments and savings plans.

Don’t be one of the poor suckers that gets taken to the cleaners by a well written sales letter, or an “expertly” compiled video on YouTube! Leave commodity futures trading to the professionals and stick with the more boring forms of investment, such as mutual funds or stocks and bonds.

Forex Trading Is Not For The Faint of Heart